The Tantur Ecumenical Institute arose out of robust conversations among Christian churches and communities at the Roman Catholic Second Vatican Council in the 1960s. Through the generosity of the Roman Catholic University of Notre Dame, the Vatican acquired property south of Jerusalem and built there a magnificent building that could respond to Jesus’ prayer “that they may all be one… that the world may believe that you have sent me.” 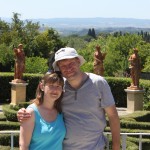 Being at Tantur was an amazing opportunity to spend time immersing ourselves into a very different culture and context.  We were privileged to meet many people, from different faith backgrounds, who opened our eyes to the complexity and realities of the situation in Israel / Palestine through their honesty and openness as they shared with us.  Places that we have been reading about for so long were brought to life for us as we went out on trips and visits, and it became a truly life-changing experience.

The Institutes’ founders proposed Tantur to be a “place where people who share a common commitment to the gospel can also share a common life dedicated to academic pursuits within an ecumenical context.” They believed that an advanced institute for theological research welcoming scholars from around the world representing Christians of different confessions could contribute significantly towards Christian ecclesial unity.

The Tantur Ecumenical Institute is a living theological and scholarly laboratory of unity and reconciliation among Christians. It is founded on the conviction that reconciliation may be served through theological research and study, conducted in the context of a shared life, situated in an area defined by profound religious heritage and historic conflict. Serving as a vital Christian presence in the region, Tantur also seeks to renew and strengthen relationships among people of different faiths.